Indiana beats down Louisville with 5-1 win on Friday 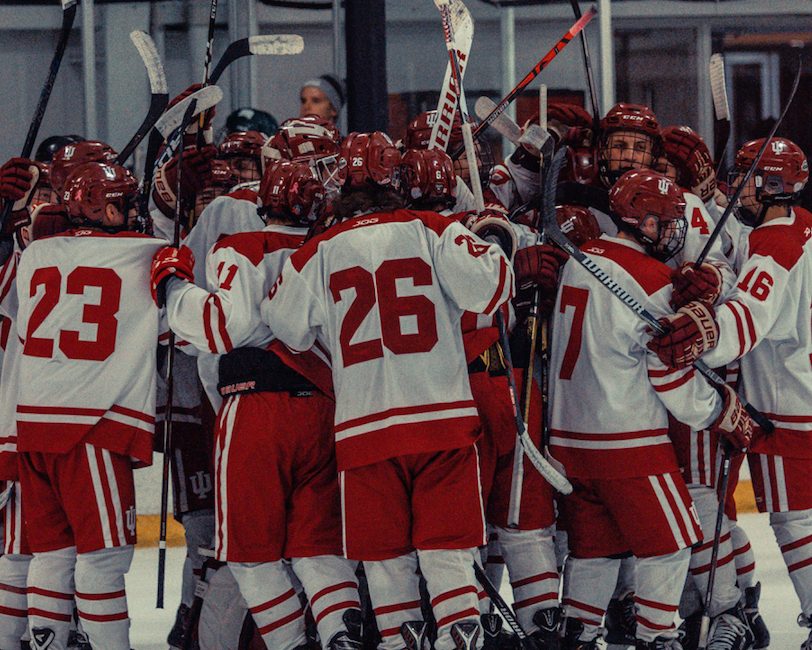 Bloomington, IN— The Club Ice Hockey at Indiana University’s rapid fire offense picked uo right where it left off two weekends ago.

A 5-1 drubbing of the University of Louisville on Friday at Frank Southern Ice Arena gives Indiana (5-5-1), an opportunity to sweep the Cardinals (4-8-1) for the first time since joining the ACHA D2 classification in 2014-15.

The game’s first goal came with 2:45 remaining the opening frame when Jack Kissell collected the puck that took a deflection off the end boards in the Louisville defensive zone. The freshman crammed it past Cardinals netminder Cam Walsh to give Indiana a 1-0 lead.

Indiana took a 3-0 lead into the locker rooms when Everhett Grimes dipped his way past a Cardinals defender and fired a wrister past Walsh from the right circle with seven minutes remaining in the period.

In the final frame, Colan Fitzgerald added to the Indiana lead on a heavy bar-down goal past Walsh’s blocker side to give the cream and crimson a 4-0 lead.

Indiana’s final goal came on the power play when Jack Jordan, the only active player who had scored an Indiana goal in last season’s match-up against Louisville, crammed the puck past Walsh below the right goal line, giving Indiana a 5-0 lead with. 5:32 left in the game.

The game ended with plenty of physical altercations from both sides.

In the last two minutes, five different players were booked with fighting, roughing and cross-checking penalties.

Indiana’s Vladislav Khrushch and UL’s Jack Scott were sent off with no time left on the clock after both had dropped the gloves.

Series shifts to Louisville on Saturday:

Puck drop for game two of the home-and-home series begins at 7 p.m. Saturday at the Iceland Sports Complex in Louisville, where Indiana took the only match-up against the Cards last season (6-3).