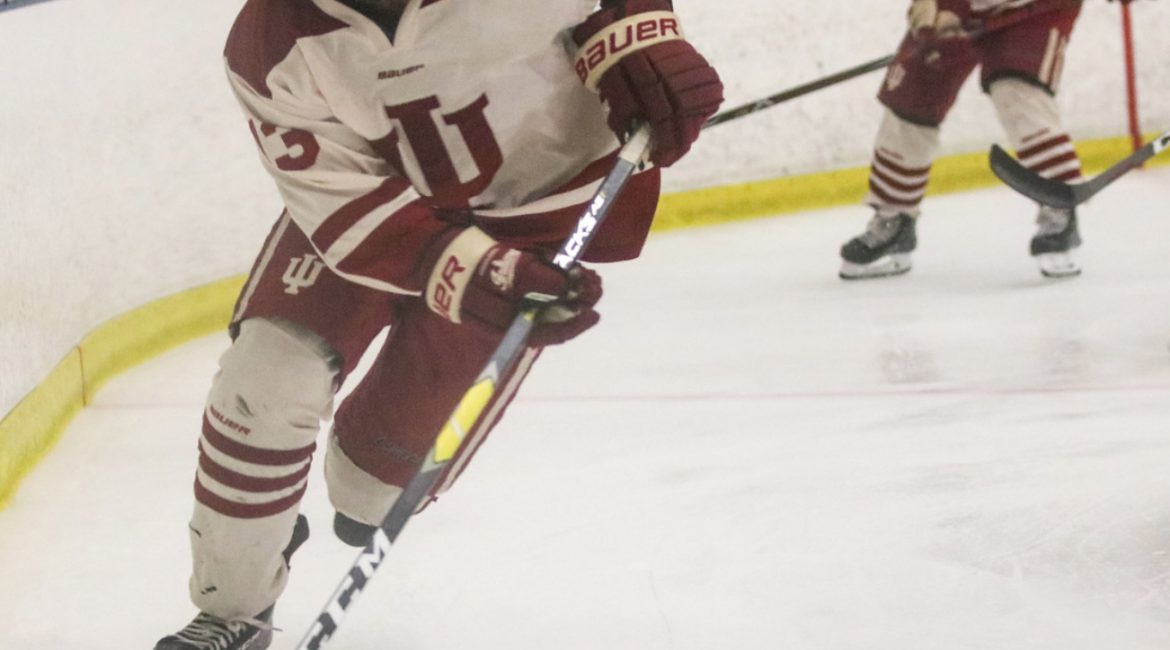 The win for Bradley (6-4) split the two-game series and it’s the Braves first all-time against Indiana (3-2-1) at Frank Southern Ice Arena since Indiana reclassified to the ACHA D2 classification in 2014-15.

Indiana, similarily to Friday night’s win, opened the scoring in the first period on Christian Tschampel power-play goal, less than 10 minutes into the game. He took a deflection on a Vladislav Khrushch.shot in the slot and tipped it past Bradley goaltender Devun Schneider to give Indiana a 1-0 lead.

Of the seven combined goals, six were scored on the power-play (Indiana:3, Bradley: 3)

Bradley closed the opening frame with back-to-back goals to take a 2-1 lead into the intermission.

Nick Sorrentino cashed in on Bradley’s first power-play opportunity of the game. He pounded a rebound chance off of Indiana netminder Cameron McNamara’s pad to tie the game 1-1.

Minutes later, Josh Crandall wristed a shot past McNamara’s blocker to give Bradley a 2-1 lead with less than two minutes remaining in the first.

Indiana tied the game in the second when Cade Kenyon scored his second goal of the season and of the series on a loose puck in the slot with 10:49 left in the second.

Indiana regained the lead when Tschampel netted his second goal of the game on a wrister past Schneider to give the cream and crimson a 3-2 lead with three minutes left in the frame.

Bradley responded early in the third period on Kyle Tintera’s second goal of the series three minutes into the period. He collected a loose puck on the left goal line and wristed it past an outstretched McNamara to tie the game 3-3.

Through the last 17 minutes of regulation play, each side had multiple opportunities to win the game, but both McNamara and Schneider didn’t budge, resulting in Indiana’s second overtime game of the season.

In the overtime period, Bradley’s Robert Blackburn hammered a slap shot top shelf past McNamara to secure Bradley’s first win in Bloomington, and a series split against Indiana.

Indiana is off next week with its bye week. The team returns to action on Oct. 19 against the University of Cincinnati at Sports Plus Arena in Cincinnati.