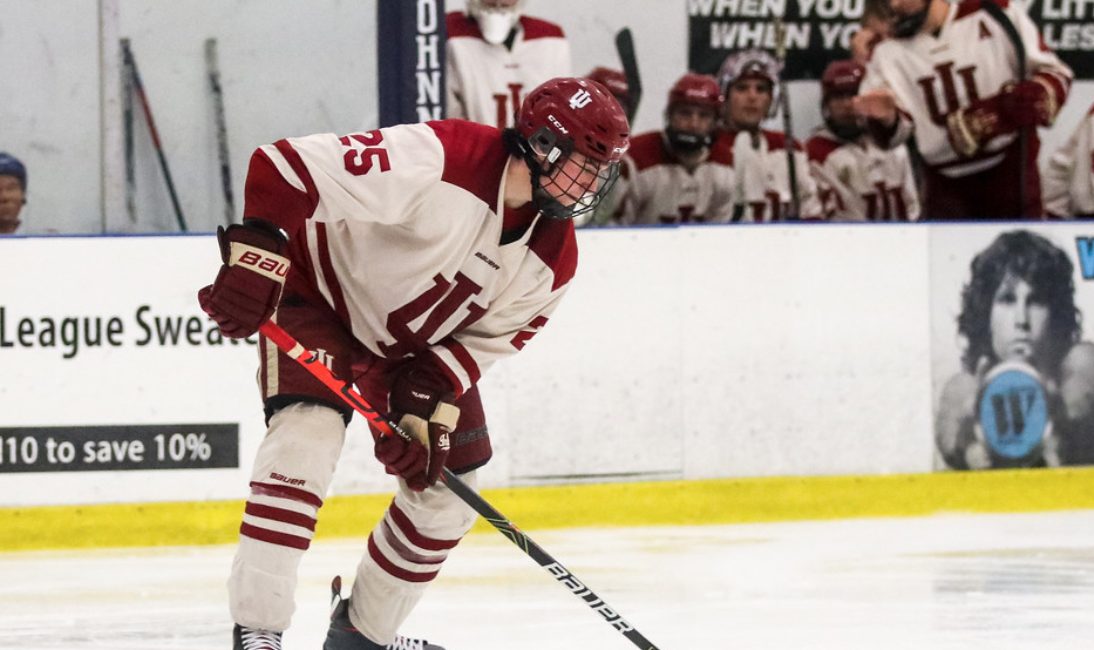 Indiana opened the scoring on Socrates Raftis’ second goal of the season. The freshman wristed a shot past Bradley netminder Joshua Soule’s blocker to put the cream and crimson up 1-0 less than three minutes into the game.

Two minutes later, Indiana doubled up its lead on one of two Vladislav Khrushch first period goals. His opening goal was past Soule’s glove to give Indiana a 2-0 lead.

Minutes later, Khrushch scored his second goal of the night to give Indiana a 3-0 lead with 10 minutes left in the opening period.

With a three-goal cushion entering the second, Bradley’s Kyle Tintera lit the lamp for the Braves to cut the Indiana lead to 3-1 with 6:41 left in the second.

Tintera wrapped the puck around Indiana starting goaltender Stephen Gaisor, who made the initial stop on Tintera, but Bradley’s all-time leading goal-scorer deposited his team-leading fifth goal of the season to put the Braves on the board.

Indiana answered when Christian Tschampel scored his second goal of the season with 3:12 remaining in the middle frame.

He scored after a broken play occurred in front of Soule in the crease, and amidst multiple bodies scrambling in the slot, Tschampel poked it past Soule’s pad to give Indiana a 4-1 lead entering the third.

Indiana took a 5-1 lead six minutes into the third when Jack Jordan prodded the puck past Soule to maintain his offensive hot streak.

With the goal on Friday, Jordan has now scored in three consecutive games.

Indiana topped off a six-goal night on Cade Kenyon’s first goal of the season. After a Bradley defensive breakdown, he barreled into the attacking zone and deked Soule, beating him blocker side on a backhand shot to give Indiana a 6-1 lead with 1:25 left in the game.

Dating back to the start of last season, Indiana has outscored opponents 54-29 at Frank Southern Ice Arena.

Indiana closes out its homestand against Bradley on Saturday with game two of the weekend set beginning at 2:45 p.m.